Generational Wealth is a phrase that has been tossed around a lot in the last few years. While I’m happy the topic is being brought up, I worry about a few things. I’d like to address these things in hopes that by the end of this, you, my dear reader, would have a better understanding of Generational Wealth and why it is very important.

Do we understand what Generational Wealth is?

The most basic definition of generational wealth is wealth that is passed down from generation to generation. Usually each generation adds to that wealth before passing it down to the next. Yes, there have been cases where generational wealth gets depleted by a recipient of that wealth but even then the opportunity to recover is greater (but we will get to that later). So what are some of the things that create generational wealth and can be passed down? Well some of the obvious ones are real estate, family businesses and investments. Some of the others that are not so obvious are collectibles/antiques/heirlooms, savings, life insurance policies and even cold hard cash. Each of these verticals of wealth comes with a range of difficulty to entry, meaning some are easier to obtain than the others. In the same token some have a far greater impact than the others. For the purpose of the rest of this article we will be focusing on….you guessed it REAL ESTATE.

Why is it important?

There is a saying “I’d rather be rich and miserable than poor and miserable”. I absolutely agree with this. Now I’m not saying people should go out and be miserable for the sake of money nor am I about to preach the gospel of wealth but for me this quote really hit home when I started having children. I started to think about what kind of life I had lived up until my first son was born. Growing up I was considered upper middle class. My wonderful parents came up from nothing and made something of themselves using real estate as the primary means to achieve wealth. My parents weren’t billionaires but they had accumulated a substantial amount where my 4 sisters, 3 brothers and I not only enjoyed a life without want but also enjoyed some extra comforts as well. One thing my parents DID NOT do was pass any of that wealth down to me nor used it once I graduated high school. They did not pay for my college, they did not help me buy my first home, the most they’ve ever done was buy my first car. So when I graduated at 16 and turned 17 a month later I set off to college 5 hrs away from home and nearly crashed and burned. I was cut off financially. I had experienced poverty for the first time in my life. You see, it was my parents’ belief that if I were to go out into the world I had to learn how to make it on my own without any financial backing. It would make me a stronger, more resourceful woman. The wealth they accumulated was to be used to make sure I had a good life while I lived under their roof and prepare me for the world, hence the car and Catholic school tuition. Needless to say my parents did not understand generational wealth. Side note: I had a wonderful childhood and wonderful relationship with my parents and I always had the option of coming back home and living under their roof.

Me at FIU dorm

So I found myself a poor and homeless college student doing what I could to survive until graduation. I joined the Navy in my last year of college and finished up my degree virtually while I was in Japan. Now I mentioned that when my first son was born I really started to consider generational wealth. I started to think about what would have happened if my parents had used their wealth to help me out during my college years. I definitely would have never struggled nor experienced the statistical things women face during periods of homelessness. I probably wouldn’t have joined the military (which I’m so happy I did). While I’m grateful and proud of how far I’ve come in life on my own and with a little help from Uncle Sam, I KNOW that I do NOT want my children to struggle the way I did. I wanted to accumulate wealth so that not only I have something to pass down to my children but as they grow I can give them the advantages I had when I was living with my parents and the advantages I didn’t have when I left for school.

When I left the Navy and started my company I began to research the verticals of generational wealth, naturally I decided to accumulate wealth the way my parents did with real estate. These are the factors that led up to that decision.

What can we do to obtain generational wealth and close the gap?

It wasn’t until I started to notice my leads were coming back as non qualified did I think of generational wealth beyond myself and my family. I noticed also that it was mostly Black and Brown people coming back denied. Upon further research (by research I mean I went down a rabbit hole) I found that Black borrowers were significantly more likely to be denied a mortgage than those from other demographics. I found an article published by Zillow that read “Data from the Home Mortgage Disclosure Act showed that lenders denied mortgages for Black applicants at a rate 80% higher than their white peers and more than double (120%) the rate when applying for conventional loans”.(1)   So we have a group of people who went through more than 300 years of racist and exploitative housing policies and here we are today the same group of people facing ridiculous barriers to home ownership.

Home ownership for the majority of Black and Brown people is the only viable way to build generational wealth and close that gap but they can’t. Becoming a broker myself I understand that we can’t just willy nilly give homes to people and some rules and regulations are there to not only protect against default but also to make sure the home buyer is protected as well. In my search I realized that everyone in the industry knew these barriers existed and it was a major problem. It wasn’t until I read these words from HUD (Department of Housing and Development) “Despite the Administration’s actions, it is clear that continuation of the increases in minority home ownership that occurred during the economic environment of the 1990s is not assured for the future. Private sector actors involved in the real estate and mortgage lending industries will need to increase their levels of product innovation and marketing to minority families in order to sustain these growth rates.”(2) They were talking about me. I’m a “Private sector actor” and this was my call to action. It was simple for me. Remove the barriers to home ownership, create generational wealth. My innovation is our dual solution software. The Home Program App for the borrow and Home Pros LOS for the lenders.

Popular posts from this blog 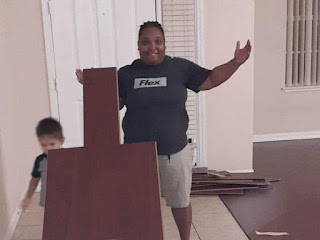 YOU MADE IT! You did! The stress is over, the tears of joy and maybe a little panic have been shed. You’ve probably cracked open that bottle of wine (or if you are like me that beer) and sat on a box in your probably empty living room and just took it all in.  Now what?  If this is your first home and you didn’t have a lot of support about what to do about what happens after the home buying process, have no fear, I made all of the mistakes, or as I like to call them “discoveries” for you.  Read carefully and enjoy.  1. Get to know your neighbors.    This is one of those things that doesn’t happen anymore but I cannot stress doing this enough. We’ve all seen this in movies. Someone moves into the neighborhood and immediately the door bell rings and there’s this family with a creepy smile and some casserole or baked goods in their hands welcoming you into the neighborhood. Yeah, that doesn’t happen in real life. The most you will get as you are unloading your UHaul is the neighbors outsi
Read more